From Table 1, it can be seen that after experiencing the hot market situation in March, the subsequent April and May are declining trends, and the market growth gradually slows down. 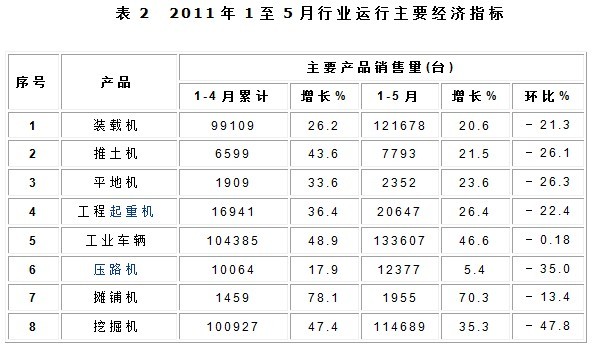 As shown in Table 2, from January to April in 2011, the main construction machinery product lines included eight types of excavators, loaders, bulldozers, cranes, rollers, paver machines, forklifts, and graders, averaging over 25% each. The growth trend. Among them, the paving machine has the largest increase of 78.1%; followed by industrial vehicles, mainly forklift products, an increase of 48.9%; before the excavator in April accumulated growth of 47.4%. Let us review the highlights of March. In the month of March, 24 major excavator manufacturers sold 43,063 excavators, a year-on-year increase of 42.92%, a new monthly sales record. From January to March, 74314 excavators were sold, a year-on-year increase of 58.60. %, continuing high growth, sales in March set another record for the year.

However, after entering the month of May, none of the eight major aircraft products showed a declining month-on-month ratio. Among them, the excavator experienced the largest decrease in the chain ratio. In May, the cumulative sales volume of the market dropped by almost 50%. From this we analyze that there are various potential market factors behind the explosive growth of excavator sales in the first three months of this year. There are both rigid demands for the start of construction projects and some speculative psychology. However, with the continuous upward adjustment of the reserve ratio in the near future, Bank loans have become more difficult, and the most important issue facing the construction of many projects has been highlighted. Once a project encounters problems, it will inevitably cause a large number of excavators to start underutilized or idle. Recently, some excavator owners have sought to sell equipment to the market to ease the pressure on loans.

At the same time, Secretary-General Su Zimeng believes that the current major problems in the construction machinery industry are as follows: the impact of the national macro-control policies has gradually emerged. The impact of the national macro-economic policy adjustment in the first quarter on the construction machinery industry is not obvious, and the whole industry continues to maintain rapid development. But beginning in April, the impact gradually emerged. The market competition will be fiercer, and companies will need to make greater efforts to avoid market risks. Large-scale enterprises with strong technical management markets are in a favorable position. The pressure of rising corporate cost factors continues to increase, and product prices continue to increase. The high-end parts and special raw materials are still subject to human control. The bottleneck in the industry remains unresolved. Some small and medium-sized enterprises will face difficulties in their production and operation. Firms are fighting for market share, low-cost sales and zero down payment are beginning to appear, and the market order and industry self-discipline issues are outstanding.

Although the current industry slows down, the overall growth rate of the industry will basically remain stable. The China Construction Machinery Industry Association predicts that in 2011 the industryâ€™s sales revenue will increase by about 17%. Exports will increase by more than 25% and return to the highest level in 2008.